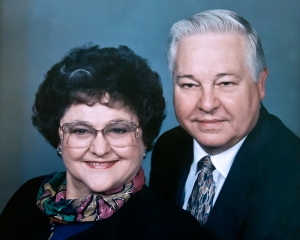 I had such big plans for the first week of March, 2012.  Between the first and the fifth, My Dad and Mom would celebrate their 80th birthdays and I would hit the half century mark. This was to be a milestone week for the three of us.

Well, life always seems to have a way of humbling us. In fact, someone once said, “You want to make God laugh? Tell him your plans!”

Unless something happens in the next few hours, Dad and I will hit our milestones. The celebration, however, won’t be quite the same. Mom didn’t make it.

Bill and Esther in 1982 at Greg and Mary’s Wedding; they were 50 at this time

Our Good and Gracious Lord called Mom home about 16 months ago. While she is not physically with us, our minds are with her often. She still makes us smile, we share a tear with her whenever we hear one of her favorite spiritual hymns, and we will always tip a pint to her on St. Patrick’s Day.

To celebrate Dad’s 80th, after a little prodding, I got him to share some of the memories associated with him turning 80.

Greg: Did you ever think you would make it to 80? I know there was a point when none of us thought you would. Bill: I first started having heart problems when I was 52. Greg: Crap! I’m 50! Bill: Back then I guess I thought I might make it to sometime in my 60s. Greg: So, how did you do it? Bill: I just stayed on top of my health issues. My advice to others? “Don’t be afraid to go see the doctor.”

Greg: What’s your first memory? Bill: I really don’t have just one, but I do remember growing up in Hoisington, Kansas in the 1930s and 1940s. Back then, kids could do anything. We rode our bikes all over Central Kansas. We spent the summer days riding, swimming in ponds, and shooting bb guns. I loved it!

Greg: Why did you get an education? Bill: After I got out of the service, I was working on a construction crew that was building a sub-station. We had to mix cement, and then take it up several floors. It was hot. It was hard work. I was sitting up there one day and said to myself, “There has got to be something better than this.” Note: Bill went on to graduate from the University of Kansas, and then spent his entire professional career working in the front office of the Goodyear Tire and Rubber plant in Topeka, Kansas. Greg: Are you still a Jayhawk? Bill: Of course! You know they just won their eighth straight league basketball championship. Greg: Didn’t you see the photo I took of your great grandson celebrating the win over Missouri?

Greg: Best vacation you ever took? Bill: The time Mom and I went to see Diane and Katy in San Diego. Then we drove the Pacific Coast Highway all the way to San Francisco. We stopped at the Hearst Castle, went sailing to Sausalito on your mom’s cousin’s yacht, saw the Golden Gate Bridge. That was great, but there were a lot of other great trips as well.

Greg: Besides Mom, who was the most beautiful woman you have ever seen? Bill: My high school chemistry partner was just beautiful, like a model. Unfortunately, I didn’t pay attention to what I was doing and mixed water with acid in a chem lab. It bubbled over and ruined her dress…probably ruined my chances with that move. Years later, I was in Cheyenne, Wyoming and looked up. There she was – a pin up girl on a calendar on the wall. I tried to tell a guy there that I knew her, but I don’t think he believed me.

Greg: Favorite saying? Bill: “I may not be a great judge of beauty, but I know ugly when I see it!” I actually stole that from a family friend….chuckle, chuckle. I’ve heard you use it many times…chuckle, chuckle.

Greg: If you were on death row, and had one last meal, what would you order? Bill: Macaroni and cheese. Greg: Really? Bill: I do like macaroni and cheese, but it would probably be prime rib and a twice baked potato. Greg: Desert? Bill: A piece of cake or a slice of pie. Any cake. Any pie. I do like my cake and pie, but I can’t eat either anymore because of my diabetes.

As I am now basically 50, I must admit my admiration for that piece of advice is beginning to make a lot of sense. Happy Birthday, Pop! Happy Sailing, Mom! On behalf of all your children and grand children – we love you both.

Repeating those words consecutively often paints a picture in most of our minds.

For some, it brings visions of an athletic setting.  I immediately, for example, can still hear 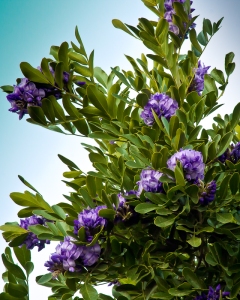 the rapidly escalating tone of my first serious basketball coach as he repeated those words to those that couldn’t make a free throw or often blew their layups. While my mom thought he screamed too much and was too hard on us boys; I knew he loved me – no matter how many times I was in his ‘doghouse.’ Looking back, I immediately smile when I think of Mr. Blackmon screaming, “Okay, Gilstrap, we know you can shoot. But can you even comprehend the concept of DEFENSE?”

For others, practice-practice-practice, can relate to efforts to improve our art, skill set, or craft. How many times did your piano teacher make you repeat the easiest, most simple tune? We likely did not see the rationale for such training at a young age. But, for many, we now take the same approach when we teach others. We just cannot argue with the old adage, “It is much better to be able to play a simple piece with strong technique and accuracy, than to struggle with a harder piece without having first developed good habits.”

When you develop a commitment to improving your photography skills, you don’t have to go far to look for interesting material. Just head out your door and start shooting. No matter where you live, I believe you can find great material. Flowers, pets, birds, sky, sunsets, interesting people, cars, even cracks in sidewalk are just a few examples that offer the potential to create a memorable picture. The list of potential subjects will grow beyond your imagination. Be prepared to see many assets and aspects in your life in new ways.

This week, I’ve been practicing on the Texas Mountain Laurel tree in our front yard.

I knew my wife and I look to the tree’s spectacular (albeit short lived) flowers as a sign that Spring has arrived in Arizona. The evergreen ornamental has an almost magical effect. I dare anyone to spend a couple of minutes admiring the blossoms without experiencing an elevation in spirit.

While I knew I treasured the tree, I did not come close to fully appreciating how different it can appear at various times of the day, under different lighting conditions, and even on a day-by-day basis.

This week, as I have practiced with my Canon, the flowers have taken on a bluish lavender hue. At other times, I’ve seen them appear as navy blue, deep magenta, dark purple, and even primarily white.

Before I took a more careful look, I simply thought the tree boasted spectacular purple flowers.

This Spring, whenever it comes to your part of the world, take time to take a closer look at what is right outside your door. Challenge yourself to see all in new ways. While you are at it, why not apply such skills to everything–and everyone–that crosses your path? Chances are you will like what you see! 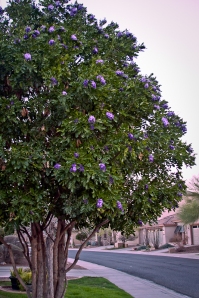 An old Welsh proverb proclaims, “Perfect loves does not come until the first grandchild.”

I’m not sure I fully comprehended this until our first grandchild, Emmett William Gilstrap, came into the world in January. 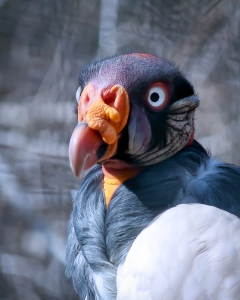 Valentine’s Day together with a trip to the zoo. We love the Wildlife World Zoo and Aquarium in Litchfield Park, and we thought it would be a great place to celebrate Valentine’s Day. Now that we are approaching 50, we thought it would be even better if Emmett and some of our children could join us. This would not have seemed highly romantic 20 years ago, but it turned out to be just that (even though we weren’t technically able to pull it off until February 15).

Predictably, the boys had other commitments. But the two nurses, Amanda (our daughter) and Katie (Andrew’s wife and Emmett’s Mom), had the day off. So, they bundled up the lil’ dude and we headed out for a great day under another gloriously sunny Arizona sky. Chepi, who has been loving Coronel (Katie’s maiden name) children for three generations, was even able to join us. 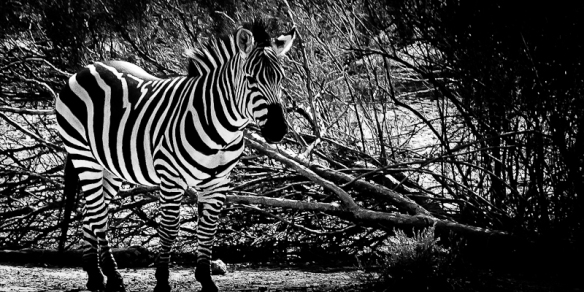 I am pretty sure Emmett won’t remember his first trip to the zoo, but his expressions seemed to indicate he knew what was going on. It was a great way to celebrate the kind of bond I believe good old Saint Valentine promoted when he gave his life paving the way for others to fall and stay in love. Along the way, I managed to squeeze in some much needed photo-remedy. Hope you all enjoy viewing the photos as much as I loved taking them. God bless! 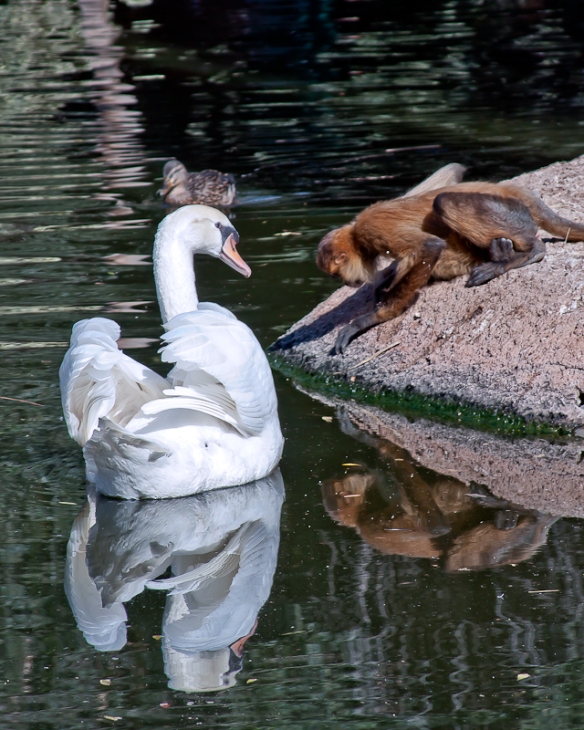 Our long-time Photo-remedy readers might recall that the mission of this blog is to encourage those fighting chronic pain and other ailments to consider using photography as a powerful tool to move their focus away from whatever ails them.

When we first started, I was primarily relying on a hunch that photography and other creative pursuits could play important roles in pain management. Yes, I had seen some research that validated this notion. But, for the most part, it was little more than a hypothesis that matched up with personal experience.

I am happy to report that this blog has continually put us in touch with an increasing amount of research that validates our suspicions. The more we research the subject, the more convinced we are that photo-remedy is a viable, well-supported form of alternative medicine.

Ashley Boynes-Shuck, in her Wellness With a Side of Life, Please blog, recently did a great job of highlighting research demonstrating that positive thoughts and emotions (which are often stimulated through taking, editing, and viewing photography) can rewire our immune systems to stimulate the release of endorphins.  Endorphins are analgesia-producing receptors located in your brain, spinal cord, and other nerve endings. Endorphins are not a single molecule, but actually come in several forms, and can be anywhere from eighteen to five hundred times as powerful as any man-made analgesics.

Boynes-Shuck even sites research that strongly indicates that love is more than ‘a many splendored thing.‘ Apparently, even just the thought of love and imagining times when you

felt the related euphoria can be a powerful remedy.

Laughter (which also produces endorphins) may not be the absolute best medicine, but the Mayo Clinic has reported it can be a darn good one. In a recent article, Mayo indicated some of the short- and long-term benefits of laughter are that it can:

Here at photo-remedy, we will continue to encourage you to ‘fight with a smile.’ Based on the research, however, don’t be afraid to mix in an ample supply of love and laughter along the way.

Note: This posting features a few of the endorphin-releasing photos we have recently taken and experienced. 🙂 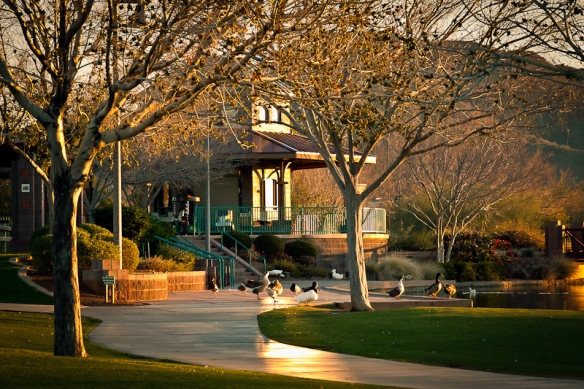 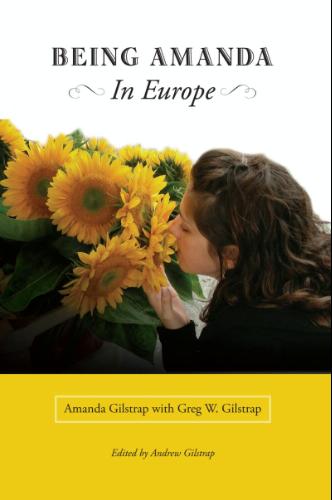